A Primer to AS2

AS2 has been out for a while but I bet most of you have never heard of the spec. Indeed, a couple of months ago I myself was oblivious to it. That is until ModusBox asked me to help them build a first-class AS2 connector for Mule.

AS2 (Applicability Statement 2) is a protocol that operates over HTTP/s and is typically used between organisations to exchange business data in any format securely. The exchange of business data for the purposes of purchasing goods and services is commonly referred to as B2B. Traditionally, B2B was done over VANs (i.e., Value-added Networks) that were secure and reliable however also expensive. The Internet provided a cheaper option. Yet HTTP is not sufficiently secure. Now you might be saying “You have HTTPs for transporting sensitive data". Well for one thing, HTTPs protects your data while it’s transiting from point-to-point; not end-to-end. It’s possible that a document intended for your partner passes through an HTTPs intermediary such as a gateway owned by a third-party:

After the gateway’s HTTPs software peels off the request’s security layers, the document is open for reading and modification with potential harmful consequences. End-to-end security requires a higher level protocol and this is where AS2 comes into play [1]. AS2 relies on S/MIME to offer encryption and signing capabilities protecting the document throughout its entire journey across the network from unauthorized recipients and tampering. Moreover, digital signatures give confidence to the recipient that the sender is really who it claims to be. AS2 processes for securing the data and reading it are depicted as follows: 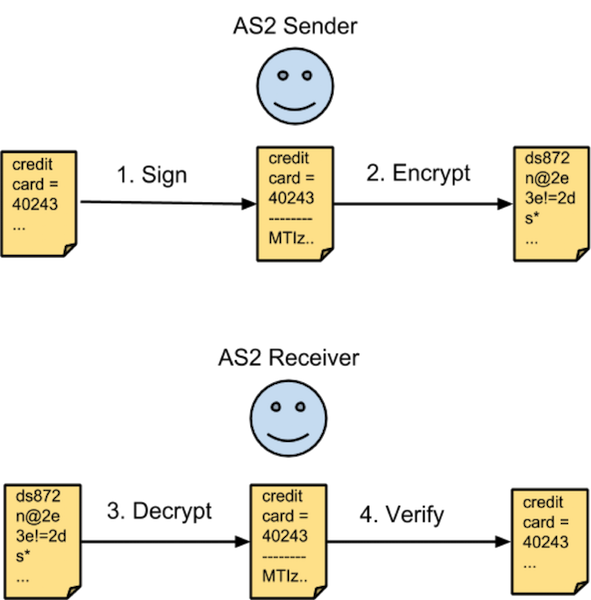 For an AS2 sender to secure the document, it:

On the other end, the AS2 receiver:

Note the certificates are usually exchanged out-of-band, as part of setting up a bilateral trading partner agreement. Consequently, AS2 normally requires some manual setup unlike a protocol, say, like TLS/SSL.

Having solid evidence that your partner actually received the document you sent is another good reason why one might want to transport documents on top of AS2. Consider the gateway example. You send a purchase order for 1000 widgets over HTTPs to the manufacturer. An encoding bug in the gateway software causes it to add an additional zero to the order amount:

You get a 200 OK HTTP status code confirming the order was processed so you assume the manufacturer received the order as it was sent. The next month, to your surprise, you find 10,000 widgets delivered to your doorstep. Quite reasonably, you refuse to settle the bill complaining the number of widgets is substantially more than the amount you ordered. The manufacturer, also quite reasonably, demands payment for the widgets it shipped to you. Given that no party has irrefutable evidence contradicting the other, there is no easy way in general to find out who should bear the responsibility for this disagreement.

Disagreements like the one just mentioned are extremely improbable, if not impossible, to happen when businesses are communicating over a fully secure AS2 channel due to the use of MICs and receipts as well as digital signatures. Below is high-level view of how AS2 proceeds to achieve this state of affairs without encryption: 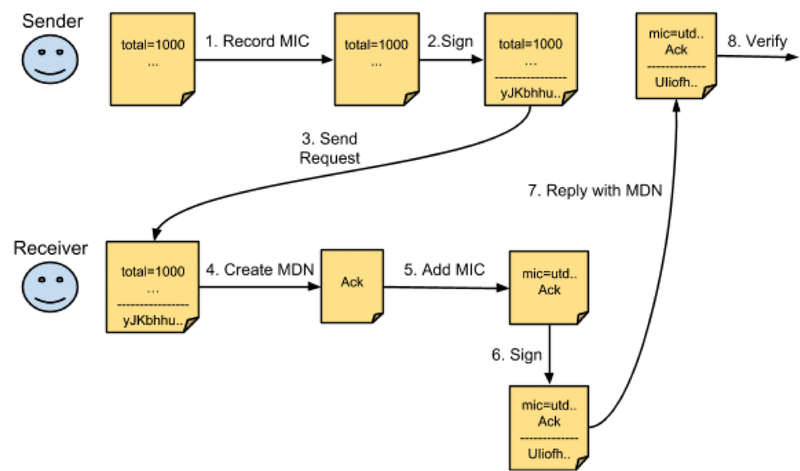 Before sending an HTTP POST containing the document, the AS2 sender:

Once the AS2 receiver has the document, it:

The sender verifies the MDN with the partner’s public key and compares its recorded MIC against the receipt’s MIC.

Till now I’ve discussed the security aspects of AS2. What about efficiency? AS2 has an option such that you can have the receiver deliver an MDN asynchronously as opposed to delivering it in the same HTTP session as the sender’s original message. This option is specified as an AS2-specific HTTP header and it provides two major benefits:

Below we have an illustration of how async MDNs work given the document is encrypted and signed: 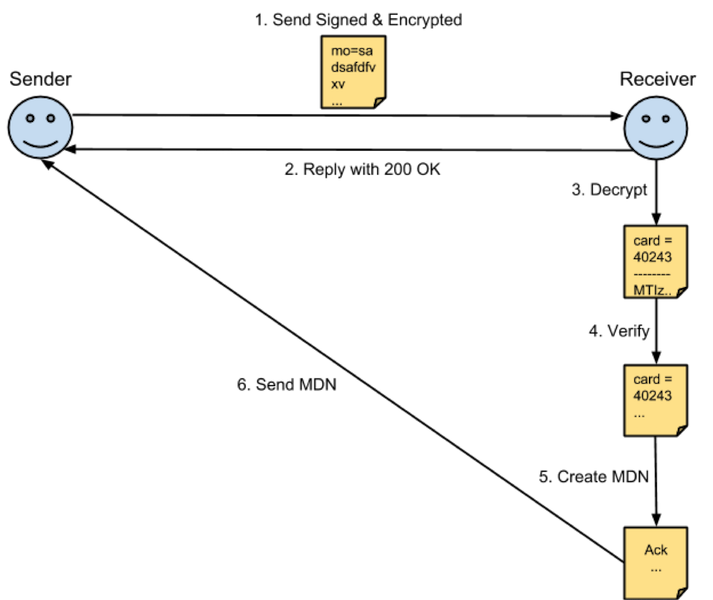 As you can see above, the recipient replies with a 200 OK as soon as it receives the request. The HTTP response only acknowledges that a request was received; not that its content was decrypted or verified. Asynchronously, the recipient goes on to decrypt and verify the document. Once it’s done, it:

In addition to async MDNs, compression is another efficiency feature in AS2’s arsenal. When signing is applied, compression can happen before or after the data is signed. Benefits exist to both ways of doing things but I’ll leave that discussion for another blog post.

This concludes a 10,000 foot-view of AS2. Considering its security, non-repudiation, and efficiency features, you can see why AS2 is the way to go for doing business over the Internet.

1: WS-Security is another way where end-to-end security can be provided. But while AS2 is format agnostic, WS-Security is SOAP specific.
comments powered by Disqus